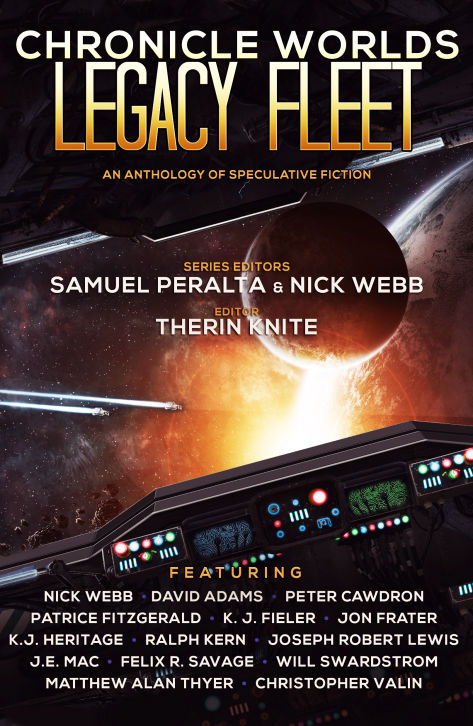 The #1 Kindle Worlds bestseller
Pulse-pounding action from the Legacy Fleet universe - war stories of alien invasion, of starships locked in planetary conflict, and of human resistance and courage in the face of overwhelming odds.

These are the untold stories from the ‘Legacy Fleet’ universe—a universe of conflict , of alien invasion, and of human resistance and courage in the face of overwhelming odds.

From Samuel Peralta, creator of the acclaimed Future Chronicles anthology series, and based on the Legacy Fleet universe from USA Today bestselling author Nick Webb – 'Chronicle Worlds: Legacy Fleet' is a ground-breaking anthology that brings together work from some of today's most exciting science fiction authors.

Spanning a time between the First Swarm War – and humanity’s first devastating encounter with the alien race – and the events of ‘Constitution’, ‘Warrior’, and ‘Victory’, these fourteen stories chart the human drama behind an epic 75-year vista of Earth’s expansion in space, and the dawn of the Second Swarm War.

If you loved the movie, if you loved ‘Legacy Fleet’, you’ll love the television series. Because here it is, the entire season, this amazing collection of episodes, of short stories— ‘Chronicle Worlds: Legacy Fleet’.

Two years before the Second Swarm War and Catherine Spencer-Churchill, a cadet at the IDF Training Academy, is the best of the very best. Her bold strategy in the ship-to-ship battle-sim is the stuff of legend… but her elation at winning soon turns to dismay.

Will she ever be able to free herself from the long shadow of Churchill’s Rock?

"The best place to discover new SF authors, I think, is any of the anthologies coming from Samuel Peralta"

Created by USA Today and Wall Street Journal bestselling author Samuel Peralta, The Future Chronicles is the #1 bestselling anthology series that brings together work from visionary new voices and from the grandmasters of modern speculative fiction.

Its unique take on major science fiction and fantasy themes - A.I., time travel, dragons, robots, aliens, zombies, immortality, galactic battles, cyborgs, doomsday - has made it one of the most acclaimed anthology series of the digital era.